You can order it here.

Please contact me in case you need the score and/or individual parts to perform it. There will be no need to order it in that case. 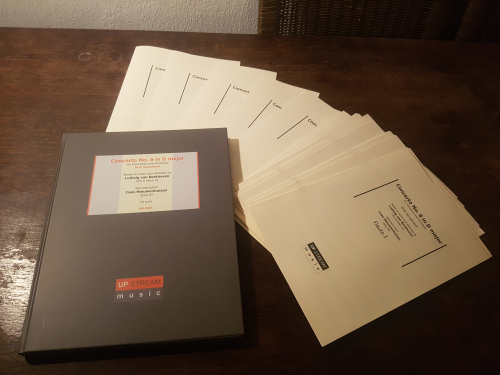 Posted at 08:44 AM in Concerto No.6 in D major for Pianoforte and Orchestra | Permalink

This is Part 2 in my series of articles in which I will describe, from beginning to end, the creation of my reconstruction of the unfinished Sixth Piano Concerto by Ludwig van Beethoven.

Beethoven’s sixth piano concerto should have gone into premiere during the latter months of 1815. He wanted to fill the entire concert with his own works but due to a lack of interest this large concert never took off. This, even though the composer had an enormous success with his Wellingtons Sieg Op.91 on December 8th and 12th in 1813 and January 2nd and February 27th in 1814. Despite the success of this work (whereby the battle between the English and French army is beautifully depicted by the orchestra), the general public’s wonderful enthusiasm for the composer suddenly waned. He now had to fall back on compositions such as the many folksongs for the English audience and occasional and incidental music. This could be the reason why there simply wasn’t room for a concert with new works from Beethoven. This may also explain why Beethoven never completed the sixth piano concerto. I strongly doubt any explanations linking this to Beethoven’s ever increasing deafness, mainly because he wrote many very large and important works during that period which were all completed: The late piano sonatas and string quartets, the ninth symphony and the Missa Solemnis were all composed after 1815.
There are, as I previously explained in the previous article, 256 bars of music in the score of the piano concerto spread over 30 pages. The handwritten pages are preserved in the Berlin State library. Further, there are loose sketches which can be found in a number of libraries, one of which in Poland.

Beethoven wrote the composition for the following instruments:

This is the classical instrumentation (with the exception of the third and fourth horn) that he used in the fifth piano concerto. I argue that Beethoven probably intended to use four instead of two horns based on the fact that the composer used four horns in nearly all his orchestral work from 1815 onwards. The use of more than two horns in an orchestra was uncommon: the composer uses two horns in nearly all orchestral work with a couple of exceptions (the Third symphony and the Léonore Overtures II and III).

Judging by the motives and themes depicted in the sketches of the piano concerto, the horns could be used in two keys. In this case, two of the horns would be tuned in D and the other two in B flat. There were only natural horns in Beethoven’s time. These horns could only play a limited number of tones in a certain key. Now a days, horns have valves. By using natural horns in different keys, Beethoven could greatly extend the employment of the horns. The composition starts with a small introduction of the main theme played by the wind section which is then answered by the piano. I will discuss the piano solo opening in part 3.

Posted at 11:39 PM in Concerto No.6 in D major for Pianoforte and Orchestra | Permalink

This is Part 1 in my series of articles in which I will describe, from beginning to end, the creation of my reconstruction of the unfinished Sixth Piano Concerto by Ludwig van Beethoven.

There was music in the royal Lobkowitz palace on the 13th of January 1811. The evening began with an overture by Righini to be followed by an “exceptionally heavy, but artistic new concerto from Mr van Beethoven”. This citation from Nepomuk Chotek describes the music now known as the famous Fifth Piano concerto in E flat Major Opus 73 dates 1808/09. This was the evening of its world premiere.

The pianist playing that evening was archduke E.H. Rudolph. Beethoven conducted the piece. On November 28th that same year, this piece was performed in Leipzig by the pianist Friedrich Schneider. Somewhat later, on February 12th 1812, the official public performance took place in Vienna in the Wiener Kärntnertortheater and was played by his student Carl Czerny.
This work, that is difficult to play, was quite often performed during this period. This is perhaps the reason why the composer started to write a new concerto. In the first few months of 1815 Beethoven wrote the draft of his new composition. He was uncertain what form this concerto would take. We know that Beethoven had many fresh ideas in this period. Before this, he had written a concerto for piano with choir and a soloist (the Choral Fantasy in C minor, Opus 80 dated 1808) and he had further plans for an Overture with choir. At the same time he was also playing with the idea of giving his new concerto a new format. For example: he had thoughts on a concerto overture for piano or even a four part piano concerto.
We will never really know exactly what Beethoven planned for this concerto because all that remains are 256 bars of the first part and 114 pages of sketches and preliminary studies.
These sketches and the score (where each part is written under each other for the soloist and orchestra) are so interesting and extensive that I decided to reconstruct the Sixth Piano Concerto from Ludwig van Beethoven.
To be continued in Part 2.

Posted at 11:29 PM in Concerto No.6 in D major for Pianoforte and Orchestra | Permalink

I am working on the reconstruction of Beethoven's 6th piano concerto (Hess 15). It will be published in 2016 in full orchestral scores.

To give you a first impression of the sketches one of my friends made a small clip. In the movie I give some examples how the pianoconcerto could sound, playing directly from the main autograph, Artaria 184, but also from the Mendelssohn 6 sketchbook. It's quite spontaneous, so please do not see it as something final.

At the moment I deciphre all Beethoven's notes, and each one of them will remain in place: one of my principles is not to change the Master's original. I am not only a musicologist but I am also a composer and think and feel as a composer. A musicologist does not empathize but argues from a musicological point of view. Being a composer is critical for an end result that is worth while to listen to. The piece is much more Beethovian and exciting than people may think when they listen to existing recordings.

In the sketches there is information for the cadenza and the development that I will use, it will have different voicing, etc. It will sound very different, more Beethoven notes, and perhaps also longer.  I will use all the available sketches, I have just received the complete high res scans from the bibliotheca jagellonica from the 1 and 6 Mendelssohn sketchbooks. Last week I copied the disks to my computer. I already saw some great (new) material, even a new bagatelle and an unknown theme in B flat major (similar to the slow movement for strings in könig stephan or the adagio of the fifth piano concerto), but it is too early to tell whether there is enough material for additional slow movement.

Rectification/error: I say in the movie that alle works from 1811 have four horns, this is not correct. This must be 'almost all works', for example the 7th sympony (1812) is an exception.

Posted at 07:17 PM in Concerto No.6 in D major for Pianoforte and Orchestra | Permalink

Welcome to my website! My name is Cees Nieuwenhuizen. I am a composer and musicologist from Holland. I studied piano, composition and music theory in Alkmaar and subsequently at the Royal Conservatoire in The Hague (The Netherlands). After I graduated I established myself as an independent composer and music teacher.

Find me on (right click to open in new tab):